Golden, CO – CaucusRoom.com announced that it will play host for the Washington State Republican Party’s live“virtual” state convention scheduled for June 26-27th. CaucusRoom is an online community for conservatives to gather, encourage, and engage locally. CaucusRoom was founded in June 2019 in Golden, Colorado and already boasts thousands of members in at least 44 states.

Previously, CaucusRoom served as the platform for numerous other nominating assemblies in Colorado. This includes multiple state house, state senate, and congressional district assemblies; culminating in a successful virtual State Assembly with the Colorado Republican Committee. With more than 200 groups organizing on CaucusRoom, the network plays host to dozens of virtual political functions every month.

“We are excited to utilize CaucusRoom’s unique features to engage online with over 1,000 delegates from all across the state. This is a big opportunity to conduct a State Convention like never before and will open the door for our activists to continue to use emerging technologies to organize online,” said Kaitlin Vintertun, Executive Director of what Washington State Republican Party.

“CaucusRoom is honored to play host to the Washington State Republican Party’s Convention this month.” said Matt Knoedler, CEO of CaucusRoom. “CaucusRoom takes political discourse seriously, beginning with a secure credentialing system and live chat that was modeled after political nominating assemblies. That is why we are able to closely simulate the functions of an assembly online, such as allowing motions in real time from a “Floor” of credentialed delegates.” 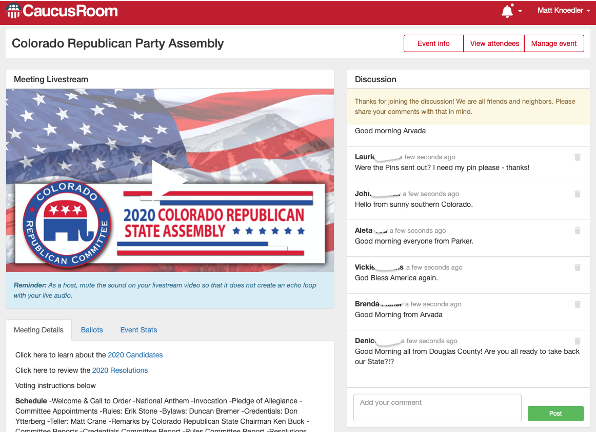