(These tips are reposted from our company feed on CaucusRoom— join CaucusRoom to get more tips and become a part of a growing network of local conservative activists! )

In 24 years in politics, I’ve been on every side of a political campaign: A candidate, an advisor, a staffer, a volunteer, a financier, and even a National Delegate to the RNC. My experience as a candidate was documented in the best-selling book “The Blueprint- How Democrats won Colorado, and why Republicans Everywhere Should Care” by Rob Witwer and Adam Schrager.

In most of these campaigns, we were out-funded, out-manned, and out-maneuvered… and yet I’ve seen many candidates overcome those challenges and win. I even did it myself, once! It’s an amazing honor, and also a fleeting one. So when I give candidates advice, part of my goal is to encourage them to run a campaign they can be proud of whether they win or lose, and one that will make an impact on the issues they care about most.

These days, my role as a political “Has Been” includes a lot of lunch meetings with prospective local candidates. So for whatever it’s worth, here are the top eight campaign tips I try to pass along to those candidates, and you don’t even need to take me to a nice restaurant to hear them!

Don’t be your own treasurer.

Candidates should never handle their own books. It takes too much time, it’s too easy to miss something, and the accountability that comes from having someone help you maintain proper records is important! The same advice goes for a campaign manager, and a scheduler.

Your campaign starts when you form your team, so pick a great team! Find some enthusiastic volunteer to handle the books as their only official campaign duty. I found a math teacher who was considering his own run someday, and wanted to see what a campaign looked like from the inside. He was wonderful, and saved me a ton of time, headaches and trouble. And he took the job seriously, as both an honor and a duty to the democratic process. I hope you can be as lucky.

Your campaign announcement is a HUGE DEAL.

Campaign Announcements are your best chance for the only softball news article during the race. The reporter will state your case– they will list your reasons for running and your bio, and there won’t be much room left for them to screw it up. It’s your first and best chance to be heard clearly.

Take the announcement seriously. Say something thought provoking. Have a crisp and clear answer ready for the question, “Why are you running?” And finally: Keep it short! Give the media just enough to ensure they will use the soundbites you want in that important first news story. Rambling on can lead to a disasterous quote… or maybe just a very bored, uninspired crowd.

It’s not about you. It’s about what you will do once elected.

No matter how compelling people find your personal biography, they want results. You seem nice enough… but what are you going to DO?

I worked for Gov. Bill Owens, the only GOP governor in Colorado in 50 years. By his own admission, he was a pretty generic looking GOP candidate: A clean cut, 6’ tall middle age white guy. He ran on three promises: “I’ll cut taxes, fix roads and improve education.” It was the only thing he said, ever. If a waiter asked for his order, he’d ask for lower taxes, better roads… you get the idea. People didn’t need to know Bill- instead, they knew exactly what he’d do. And it worked. Similarly, VA’s Glenn Youngkin made clear he’d fix education.

If done right, the candidate’s name and that issue become synonymous. It’s easier to break out in a field if you find the right issue and ride it hard- much easier than letting the race become a personality contest. It’s also easier to find new volunteers and donors if they know exactly what you’ll do when elected. And finally: It’s easier to overcome negative attacks if the campaign is not about you, but instead about the issue.

Perhaps the best example of a platform-based race: The 1994 Republican Contract with America.

Be a candidate of action, not platitudes.

Communicate your values through a call to action. If you want voters to grasp how much you care about an issue, illustrate your point with a proposal.

I often hear candidates on the stump say “I care about ‘X value,’” and maybe pepper that value with personal anecdote. “I care about families, and I’ve got four kids so I know what I’m talking about.” OK… but what does caring about families mean when it comes time to introduce legislation?

Instead, add a proposal to the statement: “I care about families, and that’s why we need to repeal the marriage penalty associated with so many federal programs. We should be encouraging marriage, not penalizing it.”

Even if you ultimately lose your race, you’ve added something real and important into your district’s political bloodstream. By advocating a policy real proposal, your opponent cannot duck or obfuscate the issue as easily. That’s why proposals like the 1994 “Contract with America” was considered one of the most powerful campaign platforms in history. Republicans won 54 seats that year and took the majority in the US House for the first time in 40 years.

Organize your message: The Awareness Ladder

This is a method to organize your stump speech. A poorly organized stump speech is a MAJOR problem for newbie candidates, and it’s usually because the candidate makes the assumption the audience is already caught up on the latest news, issues and concerns that compelled them to run for office. The audience is confused and lost from the get-go, when you really need them to get behind you and help. 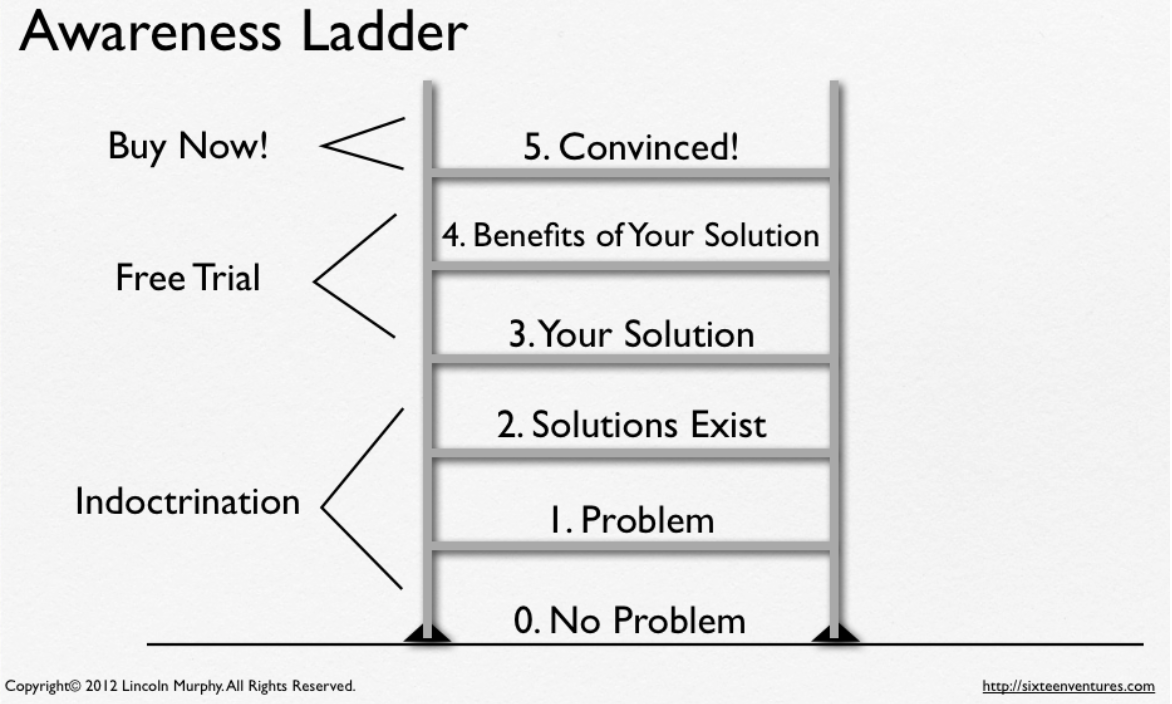 Fortunately, the problem is easily fixed if you follow a short process to organize your thoughts and message.

The “Awareness Ladder” takes any audience from “What problem?” to “Sold!” in just a few steps.

1. Explain the problem. Why should anyone care? This is really important to set up properly, with compelling facts.

2. Explain that solutions exist. “We’ve seen this before, and we know how to fix it.”

3. Your solution. What is it? Why are you the right problem solver?

4. Why is it the BEST solution?

5. Sold! What do you want them to do next? Make sure and ask for something, like “Sign up to volunteer” “Vote for me” “Write a big fat check to my campaign.” Well, you get the idea.

If done correctly, you’ve converted an agnostic to a devoted believer. Hopefully, I’ve done that right here, in this post! Now YOU can try the Awareness Ladder out and see if it works for you!

Fundraising: It’s your good name on the line!

Fundraising is a grind- there’s no easy way out, and it must be done early and consistently. The proper motivation helps, but most candidates won’t learn that lesson until it’s too late- so please hear me now!

These days, candidates are not the only players in a campaign. Superpacs and interest groups (a.k.a. “Soft money”) often outspend the candidates (“Hard Money”), but their messages may not align with your campaign message. The only message you can control is the one you put out yourself, with money you raised.

Only you can defend yourself.

The attacks come late in a race, long past the time to raise the money needed to fund a response. Coordinating with an outside group is not an option- that’s against the law. For those reasons, you must rely on fundraising you did throughout the year, with enough money to respond to attacks. If you want to correct the record and defend your good name, put consistent time and effort into fundraising throughout the spring and summer. It’s probably worthwhile hiring someone to keep you on task- but they cannot do the work for you. You must make the calls and close the deals yourself. Don’t be shy- A “no” is not a big deal. A yes is a wonderful affirmation.

In both of my campaigns, my biggest regret was not working harder, earlier on the fundraising front to defend my good name in the final weeks. I got lucky and still won the first race, despite a massive fundraising disadvantage. The second race, I lost badly. I saw my opponent a few weeks after the race. She told me she spent three hours every weekday morning making phone calls for four months- nearly all were cold-calls. That was more than three times as much effort as I put in- I didn’t even have a good call list. Sure enough, she raised three times as much.

People will offer to help, but not all volunteers are able or willing to walk five miles in a morning knocking on doors. Find a way to say “yes” to every offer, with a long list of various volunteer opportunities. The goal is to first get them invested with you. Over time, they might be willing to do more- in my campaign, that definitely proved to be the case. A “little old lady” helped to send hand written letters to thousands of voters. A large family would wave signs at street corners for me at a moment’s notice. A local activist walked over 60 precincts with me, and she later went on to elected office herself.

When the campaign is at its worst moments, spending time with volunteers might be the only thing that keeps you going. The more you have, the better it will feel! So don’t worry as much about the actual work product as the gesture they’ve offered. If you honor their willingness to help, they will inspire you and make you a better candidate.

Focus on what you can control.

This is the most important tip, so I’ll leave it as the final one. So many parts of a campaign falls out of your control, such as the attacks from outside groups, or your opponent’s skill as a candidate (just to name a few). Some days, you desperately want to change something you simply do not have the power to change. Those are the moments when all of the previous advice, I hope, will serve you well.

Surround yourself with a supportive crew on those days. Wave some signs. Knock on doors. Write something motivational to your supporters. Raise some money. There is plenty to do, so just stay focused!

Again, if you’d like to read the rest of the campaign tips, go to the “CaucusRoom Room” newsroom and scroll on down.

Candidates, we’d love to help you succeed. Start a CaucusRoom Campaign group and we’ll help your neighbors find you.